Jonathan Hobley is an English photographer who is originally from Lichfield, England. Photography isn’t his primarily main job, but for all his life he has been involved in photography.

He is almost 50-years-old, and today we would like to share his interesting story and the gallery of his photos. Namely, for all these years he had a very rare and precious photo gallery in his drawer and on his computer.

The first band who Jonathan has photographed was the Dire Straits. He sent us an e-mail where he told us some interesting facts and stories about his life, and of course, Dire Straits.

“It’s a shame that this photo gallery has been in my drawer and on my computer for years. I remember my mate playing a record, I didn’t have a clue who it was but I loved the piano, organ, and the guitar. I’m pretty sure that the album was Alchemy. I always loved synths and electronic music, and of course my Dire Straits,” he said.

“When I was about 17-18-years-old, working in a shop in Lichfield, Staffs, we had a new Amstrad hi-fi system that played CDs. We popped to WHSmiths and bought “Brothers in Arms.” Dire Straits were the first band I photographed. Later, I did some work with the Stranglers, covering some of their concerts, as well as I photographed for their magazine and photographed their first Convention,” he added.

Around 12-years-ago, Jonathan started with covering the British Touring Car Championship supplying images to the newspapers, teams, and drivers. At the time he was also introduced to football photography, shooting for various photo agencies, and he has continued with that mostly for the weekends and occasionally, during the week.

Jonathan recently became interested in aviation and often venture to the Welsh Hills photographing low-flying fast jet training as well as visiting military bases. He can describe himself as a sport and an aviation photographer.

“So, you can see, photography has really been my life. I would still like to photograph live gigs and this may be something I will look to do in the future,” he added.

About his gallery with 14 photos of Dire Straits and Eric Clapton, he said, “The photos are taken at the Hammersmith Odeon, London at the warm-up before the Nelson Mandela Tribute Concert. At the time my boss sorted me out with a Canon T70 body and a Canon 70-200 f4 lens. The film was black and white and I still have the negatives somewhere. I had a few copies of Eric Clapton and Mark Knopfler printed and framed. We later went to the concert at Wembley which was fantastic.”

Below is the gallery so you can check it by scrolling the photos one by one on the right side. Enjoy. 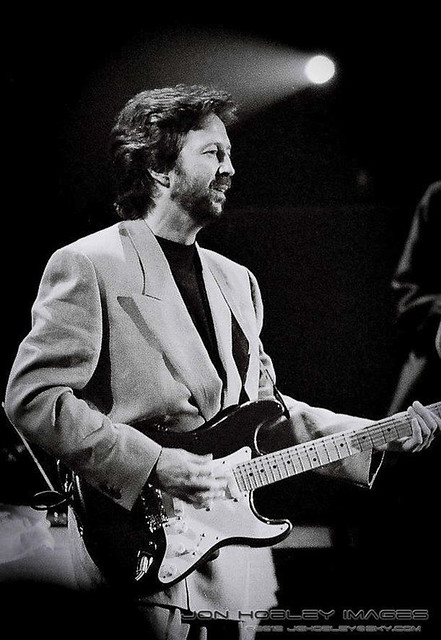 The ex-member of Dire Straits and multi-instrumentalist Guy

The last album of Dire Straits On Every Street fro